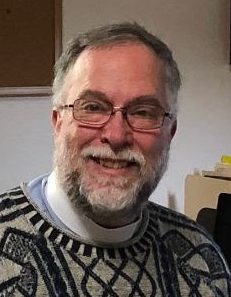 Tom received the Master of Divinity from Episcopal Divinity School, Cambridge in 1988, and was ordained to the priesthood in the Diocese of Central New York. He holds a BA in Psychology from Muhlenberg College, Allentown, PA, and two Interim Ministry Network Certifications.

His ministry began in Syracuse, New York where he served as Canon at St. Paul’s Cathedral from 1988 -1992. Tom went on to serve as vicar of two congregations: Emmanuel Church, East Syracuse from 1992-1999, and a Native American congregation, Church of the Good Shepherd, Onondaga Nation from 1994-1999.

In 1999 Tom answered a call to serve as rector of All Saints’ Episcopal Church, Chelmsford, MA. While at All Saints, he served as Dean of the Merrimack Valley Deanery, 2004-2010, and was very involved in Diocesan global mission work in Africa, including a sabbatical in Western Kenya. From 2012 to 2017 he served on the Diocesan Youth Council. Throughout his ordained ministry he has had a passion for ministry with children and families as well working for racial justice.

After thirteen years with this congregation, Tom remained in the Diocese of Massachusetts serving as Assisting Priest, St. Anne’s & St. John’s Episcopal Churches, Lowell for one year.

Tom became Supervisor of Lowell Transitional Living Center, Lowell for the next four years. A homeless shelter for adults with the mission of assisting those who are homeless to become housed, his ministry at LTLC had a different shape. Tom supervised a staff of 25 direct care workers, including hiring, training, scheduling, and ongoing support. He worked with case management staff as well as outside agencies and volunteers, and became skilled in Trauma-Informed Care and Supportive Listening. Between 2016-2020 Tom served as interim for congregations in North Easton and Lynn. He is married to Linda Barrington and they have two grown children and two grandchildren.